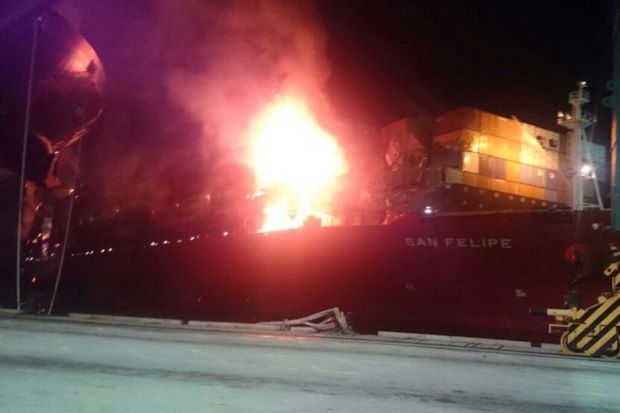 Kuala Lumpur: Investigations continue in to a very high profile and fiery collision between two big boxships at Westports in Port Klang on Tuesday. Initial reports suggest the 8,700 teu San Felipe vessel, managed by Bernhard Schulte, “made contact” with the 13,000 teu UASC-owned Al Riffa ship when approaching the berth at the busy port on Tuesday evening. The ensuing collision sparked a dramatic fire that had emergency teams working overnight to contain.

The South Channel access to the port was reopened at 10:00 am yesterday

Port Klang Authority (PKA) chairman Tan Sri Kong Cho Ha said the San Felipe had been towed to a secure area to try and contain the fire while the fire on Al Riffa had been extinguished by yesterday evening.

Combustible cargoes on the San Felipe had hampered efforts to extinguish the fire, Kong said at a press event yesterday.

A spokesperson at terminal operator Westport meanwhile heaped praise on the local firefighting teams for their quick response to the accident, which may well have saved lives.

In a statement yesterday issued on behalf of Bernhard Schulte, the shipmanager said the contact resulted in a fire in a container stack on the forward sections of both vessels.