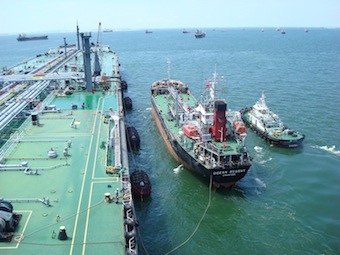 Singapore: The Port of Singapore is the first in the world to mandate the use of mass flow metering (MFM) system for bunkering. This was announced by Lui Tuck Yew, Minister for Transport, at the Singapore Bunkering Symposium today. The bunkering sumposium is one of the key events of the Singapore Maritime Week 2014, jointly organised by the Maritime and Port Authority of Singapore (MPA) and the National Metrology Centre of A*STAR.

Lui said that the use of MFM system for bunkering in the Port of Singapore will not only enhance transparency in the bunkering process, but also improve operational efficiency and increase the productivity of the entire industry.

MPA chief executive, Andrew Tan said, "To safeguard Singapore's reputation as a top bunkering port in the world, we are taking the lead in being the first to mandate the use of mass flow meters. It is a significant milestone for the bunkering industry in Singapore and it will strengthen our position in the long term as a reliable and trusted port for bunkering operations."

To assist the industry to offset a portion of the cost of the MFM system adoption, MPA will be offering a lump sum incentive of S$80,000 for each existing bunker tanker delivering MFO in the Port of Singapore. The incentive will be given out upon MPA's approval of each fitted MFM system.

The news will form a key part of the analysis and reporting in SeaShip News’ Singapore Bunkering Market Report, a glossy magazine due for distribution at this year’s Sibcon, the world’s largest bunkering event taking place in Singapore this October.

The 40-page special will be the only report of its kind to be available free to download onto your PC, smartphone or tablet.

For further details of this exciting new publishing venture, either contact helen@asiashippingmedia.com or download our new media kit by clicking here.   [08/04/14]